Examination of sinus problems in adults and children

A cold or allergy attack that wouldn’t go away? If so, there’s a good chance for sinusitis. Experts estimate that 37 million people are afflicted with sinusitis each year, making it one of the most common health conditions in world. That number may be significantly higher, since the symptoms of bacterial sinusitis often mimic those of colds or allergies, and many sufferers never see a doctor for proper diagnosis and treatment with an antibiotic.

Acute bacterial sinusitis is an infection of the sinus cavities caused by bacteria. It is preceded by a cold, allergy attack, or irritation by environmental pollutants.

Unlike a cold, or allergy, bacterial sinusitis requires a physician’s diagnosis and treatment with an antibiotic to cure the infection and prevent future complications.

Normally, mucus collecting in the sinuses drains into the nasal passages. During a cold or allergy attack, the sinuses become inflamed and are unable to drain. This lead to congestion and infection.

Diagnosis of acute sinusitis is based on a physical examination and a discussion of the symptoms. The Doctor also may use x-rays of sinuses or obtain a sample of nasal discharge to test for bacteria. 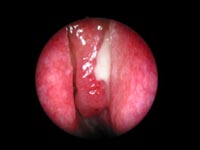 Therapy for bacterial sinusitis should include an appropriate antibiotic. If one has three or more symptoms of sinusitis (see chart), be sure to see the doctor for diagnosis. In addition to an antibiotic, an oral (amoxicillin, trimethoprim-sulfamethoxazole) or nasal spray, or decongestant drops may be recommended to relieve congestion, analgesics, although you should avoid prolonged use of nonprescription nasal sprays or drops. Inhaling steam or using saline nasal sprays or drops can help relieve sinus discomfort.

It means that some infection-caused by bacteria are immune to the effects of certain antibiotics prescribed by the doctor. Antibiotic resistance is making even common infections, such as sinusitis, challenging to treat. One can help prevent antibiotic resistance. If the doctor prescribes an antibiotic, it is important that one should take all of the medication just as the doctor instructs, even if your symptoms are gone before the medicine runs out.

Surgery should be considered only if medical treatment fails or if there is a nasal obstruction that cannot be corrected with medications. The type of surgery is chosen to best suit the patient and the disease. Surgery can be performed endoscopically inside the nose, under the upper lip, behind the eyebrow or next to the nose or scalp.

Functional endoscopic sinus surgery (FESS) is recommended for certain types of sinus disease. With the endoscope, the surgeon can look directly into the nose, while at the same time, removing diseased tissue and polyps and clearing the narrow channels between the sinuses. Microdebrider equipment allows removal of diseased tissue alone. The decision whether to use local or general anesthesia will be made between you and your doctor, depending on individual circumstances.

Before surgery, be sure that you have realistic expectations for the results, recovery, and postoperative care. Good results require not only good surgical techniques, but also a cooperative effort between the patient and physician throughout the healing process. It is equally important for patients to follow pre- and postoperative instructions.

As always, an ounce of prevention is worth a pound of cure. To avoid developing sinusitis during a cold or allergy attack, keep the sinuses clear by: 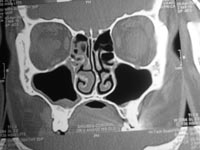 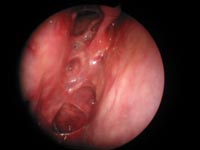 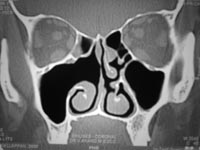 When to See a Doctor

The symptoms of sinusitis sometimes mimic those of colds and allergies, one may not realize you need to see a doctor. If one suspects to have sinusitis, review these signs and symptoms. If one suffers from three or more symptoms, one should see a doctor.

A Word about Children
The Child’s sinuses are not fully developed until age 20. However, children can still suffer from sinus infection. Although small, the maxillary (behind the cheek) and ethmoid (between the eyes) sinuses are present at birth. Sinusitis is difficult to diagnose in children because respiratory infections are more frequent, and symptoms can be subtle. Unlike a cold or allergy, bacterial sinusitis requires a physician’s diagnosis and treatment with an antibiotic to prevent future complications.

Children suffer from repeated nasal complaints more due to their delicate nasal membranes getting irritated by environmental polluton. We have to use normal saline nasal washes in a sterile manner and teach them the method of blowing out the nose multiple times.They should avoid sniffing and clearing nose.Some will require beta group of nasal drops to avoid recurrent colds.

The following symptoms may indicate a sinus infection in the child:

If these symptoms persist despite appropriate medical therapy care should be taken to seek an underlying cause. The role of allergy and frequent upper respiratory infections should be considered.