NOSE BLEEDING – How and Why

What causes a nosebleed?

Bleeding from the nose may be due to nasal trauma, irritation of the mucosa by dust or by dry air, upper respiratory infection or allergic rhinitis or coagulation defect. This is otherwise called as epistaxis.

Some are quite frightening, and a few are even life threatening. Physicians classify nosebleeds into two as

It is important to try to make the distinction since posterior (back of nasal cavity) nosebleeds are often more severe and almost always require a physician’s care. Posterior nosebleeds are more likely to occur in older people, persons with high blood pressure and in cases of injury to the nose or face.

Nosebleeds in children are almost always of the anterior type. Anterior nosebleeds are common in dry climates or during the winter months when heated, dry indoor air dehydrates the nasal membranes. Dryness may result in crusting, cracking, and bleeding. This can be prevented when placing a bit of lubricating cream or ointment about the size of a pea on the end of the fingertip and then rub it up inside the nose, especially on the middle portion of the nose (the septum).

Treatment of acute nosebleed is by application of direct pressure and if necessary, topical vasoconstrictor. It is a natural tendency to lie down if nose bleed occurs. It is safer to sit-up than to lie down. While sitting one has to pinch the nose and look down while breathing through the mouth. This is continued for 5 minutes. Many physicians suggest any of the following lubricating creams or ointments. They can all be purchased without a prescription: Neosporin, Soframycin or Vaseline. Up to three applications a day may be needed, but usually every night at bedtime is enough. A saline nasal spray or drops will also moisten dry nasal membranes.

If bleeding persists or recurs, cautery with silver nitrate or anterior nasal packing may be necessary. Using an endoscope, a tube with a light for seeing inside the nose, the ENT surgeon may find a problem within the nose that can be treated. He or she may recommend cauterization (sealing) of the blood vessel that is causing the trouble. This is done as an out patient procedure.

To prevent rebleeding after initial bleeding has stopped: 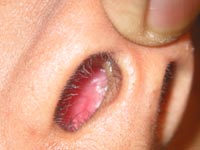 Large RCV in little’s area. The most common site of nose bleeding in younger age groups.

Prevention of further nosebleeds may include use of lubricating application to the mucosa, humidification of air, and avoidance of dusts and other irritants.