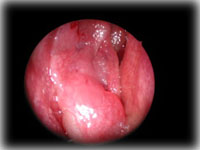 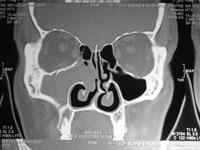 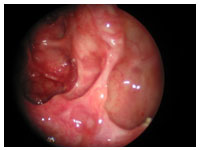 The cranial aspect of the human body always commanded respect from the patients and doctors alike. The ability to look inside the skull and diagnose intracranial diseases was made possible after advent of the C.T. and MRI Scans. These developments were complimented by developments in microsurgery in the sixties and these techniques enabled removal of tumors and other disease processes from vital neural areas till then considered inaccessible.

Parallel developments in endoscopic key hole surgery took place in the seventies. In Austria Professor Messerklinger introduced Endoscopic concept in treatment of sinus disorders. Prof. Stammberger in the University of Graz, Austria standardised the endoscopic ENT techniques and was instrumental in development of this new technique in the Non-German speaking countries. Before this effort these techniques were not prevalent in other Western countries as the publications were mostly done in German medical journals.

True sino nasal diseases are caused by blockage in nasal sinus opening and stagnation of secretions inside. Blocks may arise from deformed openings of these sinuses, bent nasal septums or development of new diseased tissue called polyps.

Technically speaking, sneezing or nasal block caused by nasal allergy or vasomotor rhinitis does not always imply sinus disease, even though symptoms may be present a long time. Public concept of sinusitis is akin to the belief that every sore throat is an attack of tonsils, which is not always true. A true sinus disease / polyposis causes nasal block, watering, face-head pain, alterned sense of smell and vision, displaced eyes etc. Due to the close proximity of eye and base of skull a spreading sinus disease involves these areas. The incidence of this type of spread is found to be more now as C.T.Scans and Endoscopes are used for diagnose. In a study 11 out of 28 patients who underwent endoscopic total sinus clearance (Spheno ethmoidectomy) for polypoid disease in our center were found to have disease spread beyond sinuses.

Continuous use of powerful antibiotics instead of surgical clearance in presence of long standing true sinus sepsis has been found to promote growth of fungus which is resistant to these drugs. HIV positive patients and Diabetics are more at risk.

Presence of fungus results in fresh polyps due to the hypersensitivity to fungal protein, Destruction of bony confines of sinuses occurs by mechanical preasure thus promoting spread. Most of the patients who had extra sinus spread had fungus isolated from the removed tissue – specimens.

Advent of the endoscopic technique in nasal surgery provided the impetus for cleaning intracranial extensions of nasal disease by the ENT surgeon. In India patients with sino nasal disease seek surgical intervention relatively late when compared with the West. An inherent fear of recurrence of sinus disease after surgical clearance is one important reason for late presentation. In this situation a high incidence of spread of sinus disease into the orbit of the eye and intracranially through the anterior skull base is encountered. Ability to widen natural opening of paranasal sinuses with endoscopic technique has minimised the recurrence of chronic sinusitis. Restoring the physiologic mechanism of clearing by ciliary transport system through the natural sinus opening ensures that the secretion does not accumilate inside sinuses avoiding future infections.

Dealing with such spread requires extreme caution as minimal damage done during surgery can cause major post-operative problems. The execellent vision provided by the endoscopes helps in precisely clearing growing sinus disease from orbit, optic nerve and the dural-meningeal coverings of the brain.

Hence a forced migration of the ENT operating field took place from strictly intra nasal areas to ophthalmic and neurosurgical territories. Invaluable experience gained from treating sinus disease endoscopically was most advantageously utilised. A successful continuation of this nasal endoscopic technique in dealing with neurosurgical intracranial disease was performed in 1990 at the Hospital Central, Nancy, France. A combined ENT Neurosurgical team approach is adapted in MCV ENT Trust Hospital since 1993 for endoscopic removal of pituatary and other intracranial tumours through the nasal cavity – sphenoid sinuses . This technique is expected to gradually replace the standard micro neuro surgical removal of pituatary tumours in centres where the technical expertise is available. Apart from the advantage of precision in removal, ability to look side ways results in better disease clearance. Endoscopic method offers a simple and rapid access to the intra cranial area and also under direct visualisation improves the surgeons ability to resect tumours. This minimally invasive surgery (MIS) technique results in less number of days in the hospital and due to the small opening less incidence of post-operative cerebro spinal fluid leak. Apart from pituatary tumors clivus tumours and intracranial abcesses in para sellar region have been treated by this endoscopic technique in our centre.

A combination of surgical specialities directed toward treatment of a single disorder is an advantage. In case of extended sino nasal diseases and intracranial tumours the ENT – neurosurgical combination has an important role in future thanks to the endoscopic technique.

Radio Frequency and Laser surgery is used for the reduction of tissues in nose without bleeding and post operation swelling – pain. Nasal septal clips (or) Splints hhare used for nose septal surgery. These method allow us to leave the patients nose pack free in post op period.

Image-guided surgery is one of the most significant advances in endoscopic sinus surgery since the inception of the endoscopic sinus surgery in the mid-1980s. This technology enables the surgeon to follow the anatomic dissection of the sinuses on a computer monitor in the operating room in real time. Difficult anatomic relationships can more easily be understood and treated with the assurance that the critical landmarks are secured.

Image-guided surgery has become an industry standard for many endoscopic sinus surgeries. The American Academy of Otolaryngology – Head and Neck Surgery (AAO-HNS) endorses the use of image-guided surgery for procedures including: